A question posted on a FB Disaster group I belong to asked why #PuertoRico governor Ricardo Rossello and San Juan Mayor Carmen Yulin Cruz are sending different messages on the federal recovery effort after Hurricane Maria.  Rossello’s praising FEMA and chumming up with Trump, while Cruz is using the word “genocide” to describe the administration’s incompetence and neglect that is ratcheting up the death toll with each passing day. 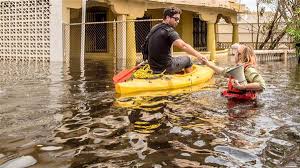 Rossello and Cruz sound worlds apart, but they’re living through the same catastrophe, and I guarantee they’re actually on the same page.  The rest is political stage-craft, and it makes sense.

Folks here surely know more about Puerto Rico than I do, but the visuals of Rossello v Cruz right now are a mirror image of Louisiana Gov Kathleen Blanco and NOLA Mayor Ray Nagin post-Katrina.

Rossello and Cruz have different roles under the Stafford Act, 43 USC 5121, which governs how disaster declarations are made, how much Washington will bill PR for the costs of recovery, and how the money is distributed.

They also have different political constituencies. Rossello represents a mix of urban and rural voters spread across the island. Cruz represents voters in San Juan. His base is broader, both geographically and politically. Her’s is more cohesive.

So Rossello has to dance more closely with the feds than Cruz because he’s the one who makes requests to Washington. He needs to stay in Trump’s good graces to get more money and resources.

Politically, he also wants credit for rescue and recovery efforts that might be taking place in certain areas, in order to maintain voter support in those regions. He wants those voters focused on the progress happening right in front of them, not the lack of progress elsewhere – and certainly not asking why *more* isn’t getting done in their own neighborhoods. If he starts complaining loudly, his constituents might grow impatient and start to change their perspective -folks who are *ok* might start to demand more from the government, and if he can’t deliver he’ll lose their support. He’s already getting hit on social media for everything that’s going wrong, so this is a real risk.

So for Rossello, it’s is all about playing nice and managing expectations.

Cruz on the other hand is one additional step removed from Washington. The money will go to PR first in terms of loans and grants, then trickle down to San Juan. So she has to be nice to Rossello, not Trump, DHS, or FEMA. And as I alluded to above, her constituents are more or less all in the same boat – she doesn’t have to play both sides of the recovery coin.

And in all likelihood, I’d bet their scripts are coordinated. Cruz has been sleeping on a cot for 8 days. Rossello doesn’t want to take the blame for that. He wants Trump to take the hit as much as Cruz does.